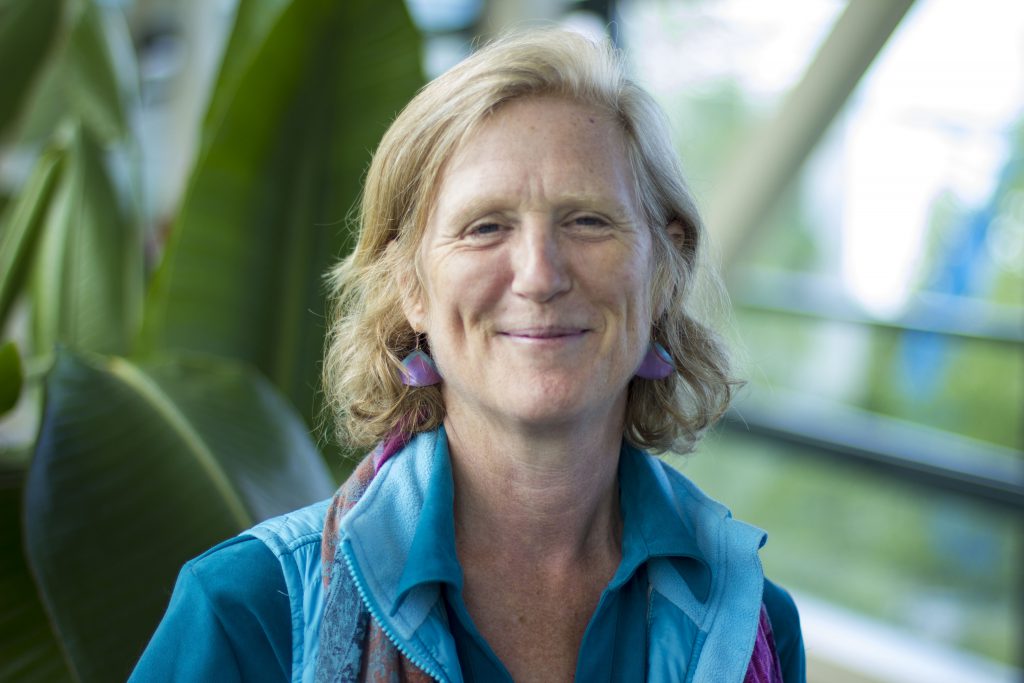 Libby is an internationally acclaimed singer/songwriter, poet, activist, teacher and lifelong Alaskan. The surprising power and depth of her music and the humor and spontaneity of her performances have attracted large and enthusiastic audiences across the continent and fans all over the world. Her six recordings have received extensive airplay on Earth and, in 2003, NASA played her song “Dig Down Deep” on the planet Mars as encouragement to the robot “Spirit.” Libby is well-known as an exhilarating and witty artist who offers a remarkable blend of passionate music, wry humor and incisive commentary on social and personal issues.

Her music has been featured in a wide range of media, including a CNN/Anderson Cooper 360 special on the worldwide healing impact of her song “How Could Anyone,”, a CBS 60 Minutes piece on “Gospel for Teens,” andan Associated Press article that ran in everything from the New York Times to ABC News to the Hindustan Times. Libby’s six recordings have been enormously successful worldwide and her folk classic, “How Could Anyone,”has been translated into several languages, recorded by many artists and reprinted in many books (including Hometown by Pulitzer-prize winner Tracy Kidder). It was sung by Hillary Clinton and thousands of others at the U.N. Conference in Beijing in 1995.

Libby has performed at a wide range of national and international gatherings, including the national Bioneers conference, the U.S. Department of Peace conference in D.C. (with Walter Cronkite), the World Wilderness Congress, the Ms. Foundation, the National Council on Sexual Assault and Domestic Violence, WAND (with Coretta Scott King) in D.C., and many others. In October 2005, the Alaska Legislature honored her art and activism with a citation of excellence.

The premiere national U.S. folk magazine, Dirty Linen, calls Libby “one of the most compassionate and caring songwriters recording today,” and the Worcester Massachussetts Telegraph said Libby “may be the folk music find of the decade!” Australia’s Rhythms music magazine calls Libby “a singer-songwriter of compassion and insight” and Ladyslipper Distribution describes her as “original, introspective, poetic, articulate, politically conscious and spiritually inspired.”

She is one of 225 world citizens (including the Dalai Lama, Nelson Mandela, Archbishop Desmond Tutu, Winona LaDuke, Ursula LeGuin and many others) whose writing was included in a book called Prayers for a Thousand Years: Inspiration from Leaders and Visionaries Around the World. Libby is also a contributor to Moral Ground: Ethical Action for a Planet in Peril, along with 80 other “moral visionaries.” Libby was a finalist for the coveted national Green Dove Award which honors people whose work links creativity, psychology and ecology, and the Alaska Woman of Achievement Award for contributions to her home state.

Along with Paul Winter, John McCutcheon, and other artists, Libby donated a track to a recording entitled “One Land, One Heart” by Musicians United to Sustain the Environment to raise money for wilderness preservation in the U.S. She has served as a faculty member of the Institute for Deep Ecology, along with internationally renowned activists and teachers Joanna Macy, David Abrams, John Seed and others. She conducts workshops on a range of topics for universities nationwide, and has edited or authored several books, includingStart Talking: A Handbook for Engaging Difficult Dialogues in Higher Educationand Alaska Native Cultures and Issues. She has directed two Ford Foundation grants on engaging “difficult dialogues” in higher education classrooms, including those related to indigenous issues, and conducts Difficult Dialogues workshops for faculty at universities in Alaska, the U.S. and South Africa.

Here are links to some of Libby’s favorite organizations: